Dartmoor National Park covers a huge 368 square miles of South Devon between Plymouth and Exeter. The landscape encompasses a range of breathtaking scenery, from valleys and forests to rivers and waterfalls. In prehistoric times Dartmoor was fertile farmland, and was well populated around 3500 years ago. The land turned to peat moorland and was abandoned, leaving behind an abundance of relics from the past such as stone circles, stone menhirs and ancient settlements. In fact, Dartmoor has one of the largest concentrations of archaeological remains anywhere in Europe! Whether you’re climbing the windswept tors, or wandering through the lush green forests, Dartmoor walks will inspire you.

Buckland Beacon is a hill that overlooks the village of Buckland-in-the-Moor and was historically used as a fire beacon. At the beacon’s base you’ll find stones which were inscribed with the Ten Commandments in 1928 and have been preserved to this day by Dartmoor National Park Authority. When walking on Dartmoor, you can usually expect a fair amount of hill climbing, but this short walk is one of the flattest routes you can take when visiting the National Park.

Cuckoo Rock is the subject of many local myths, including being a meeting place for Dartmoor Piskies (pixies) to dance under the moonlight. The rock is so-named because it was believed that the top of it looked like a cuckoo. This might be difficult to understand when seeing it! On your way to Cuckoo Rock you will pass the fascinating Yellowmead Circles. The four circular rings of stones were discovered lying under a thick bed of heather in 1921 and have now been restored. On this Dartmoor walk you’ll also pass Deancombe Farm which was operated until 1930 and has since gone to ruin. 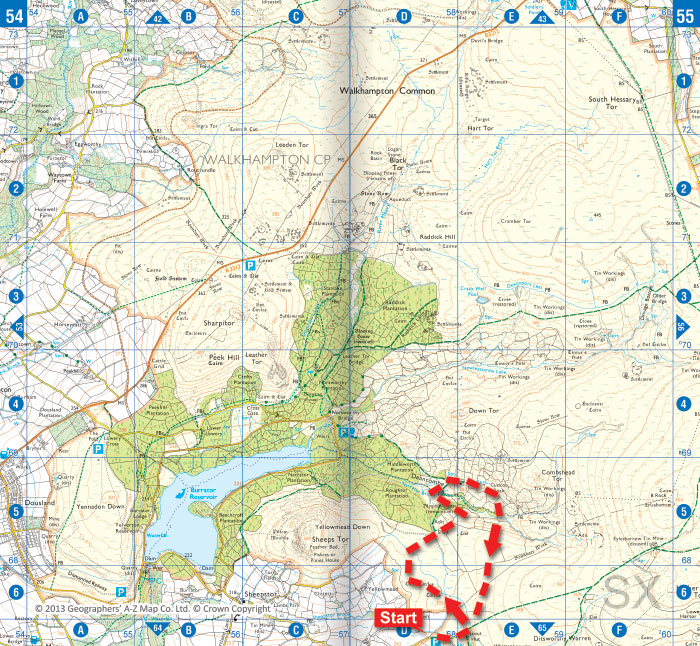 This Dartmoor walk begins at Belstone, a quaint village in North Dartmoor. The first landmark you’ll come across is Nine Maidens, or Nine Stones, a Bronze Age burial chamber encircled by around 16 stones. Like the piskies of Cuckoo Rock, Nine Stones also has a mythical background. Legend has it that there were Nine Maidens that were turned into stone as a punishment for dancing on a Sunday. From here onwards you’ll pass a number of granite topped tors which can be difficult to walk over. The views may be brilliant, but don’t forget to keep an eye on your footing! The route makes its way back towards Belstone alongside the dramatic River Taw.

The three Dartmoor walks above are shown on the high quality 25k OS Explorer mapping used in the Dartmoor A-Z Adventure Atlas. These are not well-signposted routes, so please take sensible precautions while walking on Dartmoor, especially in worsening weather conditions, and when fording rivers or crossing boggy ground. Plan your own trip to Dartmoor and discover the beauty of the moors for yourself. Use these walking routes for inspiration or plot your own using our atlas.