The smartphone revolution has put a potentially vast set of free maps into our pockets. With access only restricted by download times and data limits, why pay for other maps? A-Z’s London smartphone apps do offer highest quality A-Z mapping and fast offline access, but is that worth paying a few pounds? For this week’s blog, we’ve looked at the pros and cons, and at the customer reviews for our apps. Our conclusion: many Londoners want their A-Z too!

The main brands of smartphone come with their own free mapping and location apps, most commonly powered by Google, Microsoft (Bing), Nokia (Here), and most recently Apple. The apps provide a global mapping database that covers the full range of scales from a world map down to the neighbourhood level.  They provide location searches and multiple mapping layers, such as road mapping and aerial photography. Higher functionality can include turn-by-turn routing and public transport info. The accuracy of the mapping and the app functionality varies between the apps mentioned above, and within each app it commonly varies by country.

We provide several A-Z smartphone apps that use our famous London mapping. The apps are very good value compared to our printed atlases. The Greater London app gives you our entire London map base for around £5, and an even cheaper Mini London A-Z is also available for some devices. The London Visitors’ app shows Central London mapping that is designed to help tourists get around and see the sights, and costs around £1.50. Apps are available for Android, iOS, and Windows 7

The A-Z London smartphone map apps take advantage of many of the great smartphone functions that the free apps use. They allow GPS location tracking, and more complex functionality like measuring distances and saving your own places and routes. Pinching and zooming is supported, with several levels of mapping provided to give you very clear mapping at each zoom level. London’s places and points of interest are fully searchable using the information we’ve painstakingly compiled over many decades, with 100,000 streets and 240,000 postcodes to be found in the Greater London app. Unlike most smartphone maps, the A-Z apps also offer full offline access.

What is best for…?

The standard mobile map apps provide a global coverage, and offer a greater selection of mapping layers, including aerial imagery to check for features that maps don’t show. These apps can also offer some great advanced functions like turn-by-turn routing. Use your mobile maps or Transport for London Journey Planner if you want simple A to B directions, rather than a clear A to Z overview of the world around you.

The A-Z London smartphone map apps don’t compete with these services, but they do offer some real advantages for use in London. One standout feature is app performance. Offline access means that there is no need to stand around and wait for a signal, and no roaming data charges to pay. You can even use your A-Z maps on the tube. The second big advantage is the mapping quality. A-Z mapping is renowned for being easy to use, up to date and accurate. It wouldn’t be fair to expect a free global map service to match this. 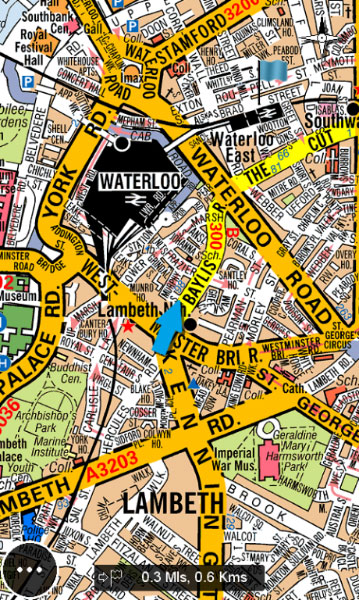 So what are people saying about the A-Z apps? We’re delighted with how well the apps have been received, with reviewers complementing the quality and value for money. Just take a look on the app store for your mobile device.

“A great map, a little bit more memory taken then the average app, but it gives me a most intuitive look at what makes up GReater London then other maps can provide.”

“Great app really pleased with the amount you get for your money!.”

“I never go to London without my trusty A-Z but I can now leave that behind. It’s great to have the real A-Z on my mobile and to have all the mod cons like being able to draw my own routes and track myself. Recommended.”

“Quickly became my favourite maps app – I use it more than Google Maps and Bing Maps. Works fine with Nokia Lumia 800 (HTC Trophy did not get on so well).”

“Magnificent! The map I’ve been using all my life, now in crystal clear form on my phone. Being able to rotate the map to any angle is a total winner. I’ve now retired my battered and beloved paper A-Z as a result.”

“Outrageous for deliveries get it!!!”