How will the Olympics change the face of London?

In 2005 Reuters described the plot of land in East London that is now known throughout the world as the Olympic Park, as a “patch of polluted wasteland”. What was once a derelict piece of industrial wasteland is now a state-of-the-art sporting complex.

Now including The Olympic Stadium, an Aquatics Centre, a Velodrome, Energy Centre, a Panasonic 3D theatre and Orbit statue, London’s Stratford area has come a long way since its former existence.

So what will happen to the Olympic Park after all the athletes and crowds have returned home? The Olympic Park will be renamed the Queen Elizabeth Olympic Park and become a focal point for London. Whilst many of the temporary structures will be removed, the long term structures, including The Olympic Stadium, Velodrome and Aquatics Centre (with its wings removed), shall remain and will provide world-class sporting venues for Elite athletes and the local communities to train and compete in.

The Olympic Village may presently be the lodgings of the greatest sportsmen and women in the world but what will become of the world-class athlete’s accommodation post-2012 Games.

In a social housing plan the Olympic Village will post Games be transformed into 2818 new homes and will be known as East Village. The mix of one and two bedroom flats and three or four bedroom homes will be open to residents in 2013 but will be allocated tenants soon after the Olympics are over.

East London’s River Lea has undergone a huge facelift after being polluted for years. The insidious plant species that once ‘swallowed up’ the area have been removed which will help the native wildlife thrive and breed long after the Games are over.

In fact with 130,000 plants and 300,000 wetland plants, the huge green space of Olympic Park makes it the UK’s largest urban park.

The low carbon energy facility built for the games is capable of powering 10,000 homes in east London, thus considerably reducing the reliance on non-sustainable power in London.

London’s wholly unique landscape has been escalated to even more impressive levels for the 2012 Olympic Games with the construction of many eye-catching buildings such as the towering Orbit, which at 115 metres in height is not only the tallest artwork in the Olympic Park but also in Great Britain.

Cable Cars and improvements to transportation

One remarkable new addition to London that will change its face forever and improve transportation in the capital by providing a much needed river crossing between the Royal Docks and the Greenwich peninsula, is the arrival of London’s first cable cars.

The ‘stunning’ Emirates Air Line system can carry up to 2500 passengers an hour on a 300ft-high journey across the Thames costing as little as £3.20 with an Oyster or Travel Card. The Emirates Air Line Cable Car is definitely one London Olympics 2012 inheritance that won’t disappear overnight. 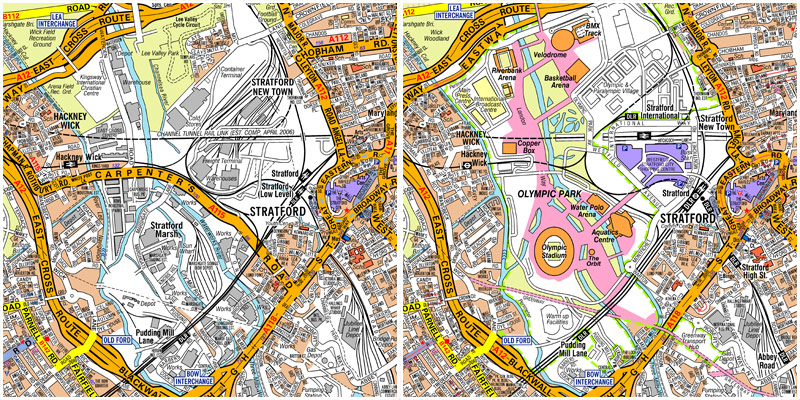 Above you can see how the landscape of the Stratford area of London has changed on the London A-Z maps, now watch as the maps change again as the planned legacy of the Olympic Games becomes a reality over the next few months and more.