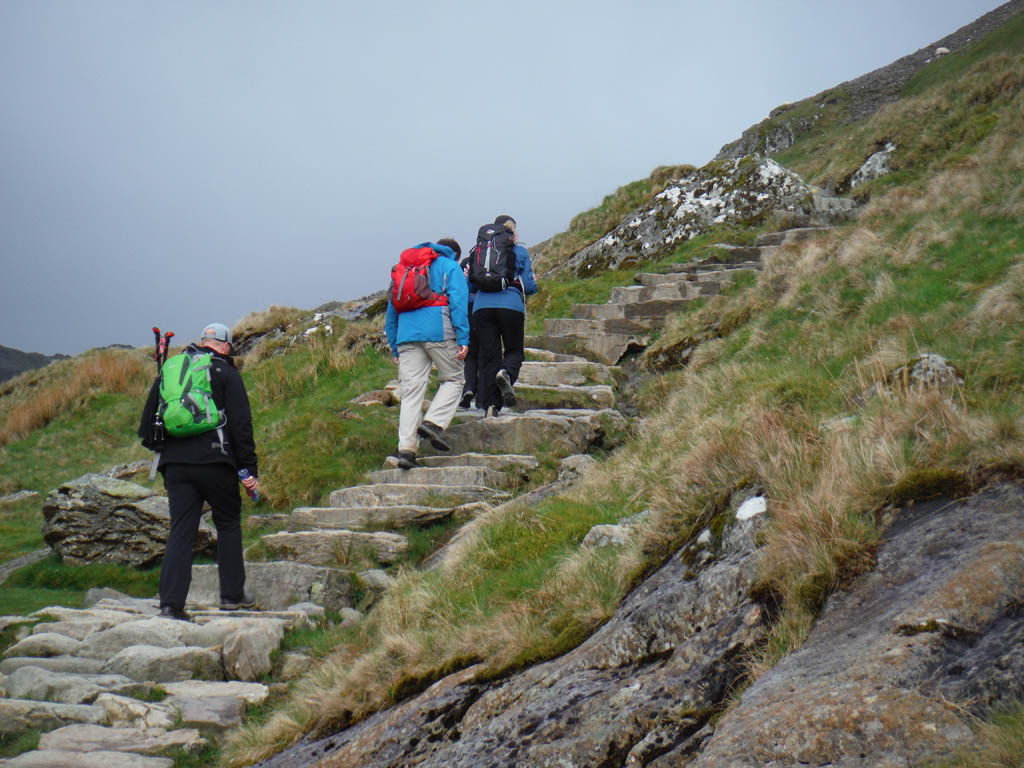 Most people know The Three Peaks challenge as a 24-hour challenge. We’ve done it and didn’t completely enjoy the whole experience. It’s true that you’re left with a tremendous sense of achievement after completing the nation’s three highest mountains in 24 hours but the time restriction that accompanies the challenge doesn’t allow much free time to enjoy the climbs, views and summits of Scotland’s, England’s and Wales’ highest peaks.  Add to that the risk of travelling (sometimes fast) between the peaks and the disruption caused to the residents of Wasdale as hordes of noisy ‘three peakers’ arrive in the Lake District at 3am, the 24 challenge is not for everyone. But there is another way…

Day One – A long journey from The South to The North To mark the release of our National Three Peaks Adventure Atlas we thought we’d give the three peaks of Ben Nevis, Scafell Pike and Snowdon another go, but this time take on the cha

llenge over three days instead. There’d be no sweaty and slightly smelly minibus this time. With no stopwatch to be racing against we could travel in relative comfort and get some decent night’s sleep. And as we’d be spending nights in Fort William, Keswick and Caernarfon, we’d also be putting money back into the local coffers too. Bonus!

So 8 of us left Kent in 2 cars at around 5am on a Friday morning with bags of enthusiasm, but by the time we’re half way up the A1M, boredom has kicked in. Even the relative excitement of trying to navigate through Yorkshire with only an A-Z of Essex to guide us doesn’t keep us entertained for long.  Still, we manage to stay ahead of the Bank Holiday Friday traffic and soon cross the border and head into Scotland.

Once we’re through the bottle neck that is Glasgow we’re soon heading along the A82 which takes us right through the awesome valley of Glencoe. We eventually arrive at Fort William at around 6pm and our accommodation for the night; Snowgoose Mountain Centre, Corpac, just 2 minutes northwest of Fort William. After drawing lots to find out who’s going to share a bunk with Tim as apparently he snores a bit (!) we head into town for our first bit of decent food for the day that’s not a pack of chocolate biscuits. We can truly recommend the Grog and Gruel in Fort William for a hearty meal and a friendly welcome; just try to avoid wearing an England rugby top as Andy did, especially around the time of the Scottish independence vote. Apparently a Burger and fries and a pint of Nessie’s Monster Mash (or a Smirnoff Ice in Hayley’s case, still thinking she’s 18) are a perfect pre-walk meal for attacking Scotland’s finest the next day. We’re pretty much the first couple of cars in the car park and it’s a calm, clear morning. Ominously all the surrounding peaks are visible except for the one we’re heading to…

Ben Nevis is the highest of the 3 peaks and normally the first of the 3 to be tackled on the Three Peaks challenge. The starting point is pretty much at sea level meaning this was going to be a long walk up and down. Wishing we’d gone for the Pasta dish instead last night, we set out across the river using the footbridge and head back along the river for about a hundred yards before turning left across some fields. After a couple of minutes we get to a sty, which proves tricky for some considering the amount of gear we’re carrying, especially Tim and Matt who had recently emptied the local Cotswold Outdoors store. Turn right here and the flat ground now gives way to the steep path named the ‘Mountain track’ or ‘Pony track’ – a rocky path that traverses the side of a huge slab. This twists and turns back on itself before you round a left hand bend and here the path steepens again to a natural stopping point.

Don’t stop here however, 50 yards further on the ground flattens alongside a small lake or Lochan. Just past this is a T-junction, make sure you turn right here as a left turn will take you around tothe North side of the mountain and a much longer and steeper ascent along the Carn Mor Dearg Arête. Just after the junction we cross an impressive waterfall which signals the start of the famous Ben Nevis Zig-zags. These are 7 or 8 short sections of path that hog the side of the mountain and with each one the terrain gets slightly steeper and the rocks underfoot get looser. The car park is still visible at this time getting smaller and smaller. Usually this far into a mountain walk all you’re able to see is a load of rock in front and behind you, but being on the side of ‘the Ben’ the road and the river are clearly visible as are the mountains that look strangely higher on the other side.

Soon the loose stones underfoot give way to the white stuff. Cue all manner of gear extracted from the backpacks; Gaiters, Crampons, poles etc. Now the mountain changes completely taking on a truly alpine feel, with a fresh dusting of snow the previous night massive snowdrifts had formed and each of the ‘Five Finger Gullies’ eat into the summit plateau perilously close to the straightest route to the summit so make sure you keep your head up, no guard rails here! 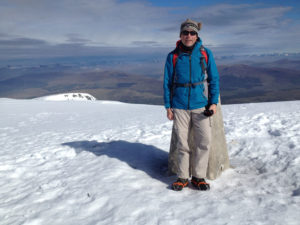 Steve’s the first one to the top getting there at 9.07am, amazingly only one other person is there, but within 5 minutes the rest of the group arrive. Even Mark, who spent several minutes helping out a group of girls with their walking poles turns up eventually.

The 6 foot cairn that the trig point sits on top of is completely covered by snow and it’s even a tricky step down to the old summit observatory. This does however give a bit of relief from theelements whilst we compose the team photo. We do this quickly as we notice that the path back is now full of walkers heading to the summit, time to go! A tip for next time If you’re planning to do Ben Nevis in May time, don’t start at 8am. We descend the same way we came up but this time have to squeeze past groups 4 or 5 wide, most gasping for air and asking ‘nearly there?’ Just around the next corner is our reply. Steve manages to pick up someone who’d been abandoned by her group, apparently a few weeks before they’d thought it would be a good idea to have a go at the Three Peaks challenge. We came across her too scared to go up or down. Ben Nevis isn’t a particularly scary or dangerous mountain providing you’re doing everything sensibly but if it’s to be your first time on a mountain something slightly smaller may be a good idea first.

The path clears after the bottlenecks that are the Zig-zags and once we’re past the Lochan and around the long right hand bend back into the valley we can see the car park. This path now seems to go on forever though; it’s still about a 3km walk back to the start / finish from here. The further we get down and the later it gets we can’t help but notice that walking boots and waterproofs have given way to trainers and shorts and t-shirts on most who now pass us, hopefully they’re not aiming for the top.

We’re back to the car by midday, ‘Saint Steve’ says goodbye to his new best friend and we’re soon off out of Scotland down to Cumbria. Our target for the evening is the Denton House Bunkhouse in Keswick, ideally placed just a 2 minute walk out of town. We arrive at 7.30pm and head straight into town for some proper grub, no more Lucozade or Flap-jacks today. We find a very accommodating pub called The Pack Horse Inn, they don’t mind us moving half their furniture around so that all 8 of us can sit together and discuss the days achievement and also to steal most of Mark’s chips. After that it’s back to the bunkhouse but not before we visit Keswick’s best Ice Cream parlour.

So, one mammoth journey and one mammoth hill done. Tomorrow, it’s England’s highest for us – come back next month for part 2 of this article and see how we get on.

We’ve just got time for a quick competition. We’re giving you the chance to win any one of our A-Z Adventure Atlases. All you need to do is answer this question:

What is the combined height (in metres) of all three mountains that make up the National Three Peaks?

Thanks to everyone who entered our Three Peaks Challenge competition. We’ve just drawn the winner so our congratulations go to Samantha Abbis who entered via Twitter with the correct answer of 3407 metres.

Look out for part two of our Three Peaks Challenge blog later today to find out whether the team completed the challenge. There could be another competition in there too…