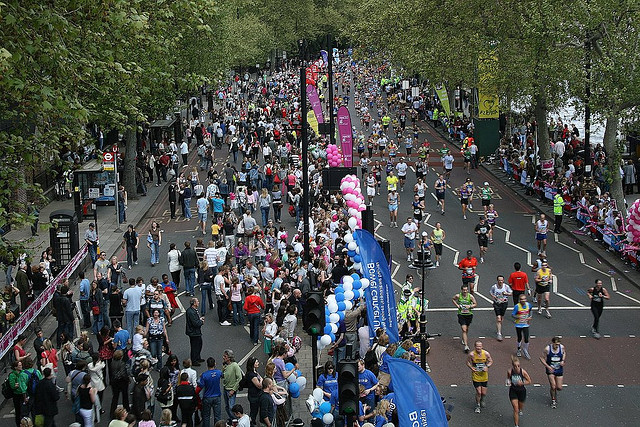 The London Marathon has been a spring staple since 1981, making the 2013 race the 33rd instalment. The London Marathon route stretches the foot-pounding and energy-sapping 26 miles and 385 yards from Greenwich to The Mall. Whether you are competing or watching, this blog outlines the current route and recommends some good lookout points.

The London Marathon holds the Guinness World Record as the largest annual fundraising event in the world. Since its inception, participants have raised a total of £315 million for charity. In order to attract more attention – and especially more funds – some of the charity runners dress up in costumes, so look out for bananas, rhinos or Darth Vader. 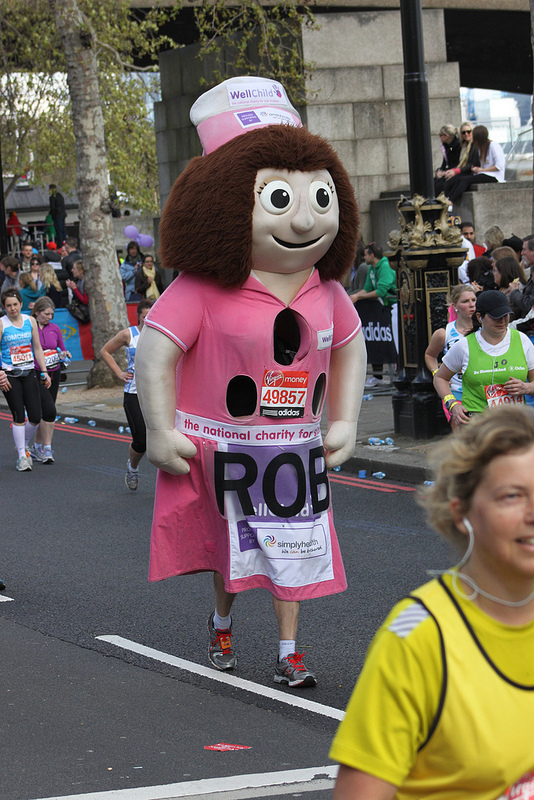 More than 35,000 runners participated in the latest race on 21 April 2012. Each year almost a million people come to watch and cheer the runners, making the event not just a marathon, but also a 42km-long street party. The next party will be on 21 April 2013.

The route of the London Marathon follows the River Thames on the south side and then crosses the famous Tower Bridge to continue through Docklands and along the north bank. On the way to Buckingham Palace, marathoners will pass a number of notable London landmarks, including the Tower of London and the London Eye. The 2013 race route will be passing the newly-restored Cutty Sark, a 140-year-old clipper ship, and there are good spectator viewing points in Cutty Sark Gardens.

Your support may be more appreciated later on. Here are some more suggestions of points on the London Marathon route where you could catch the race:

The race doubles back on itself here, so take up a position on the central reservation and you’ll see the runners twice. The first of the mass runners going east may see the elite women heading back in the opposite direction. Transport: Shadwell DLR or rail.

Here, the race starts to hot up with just over 10 miles to go. The more serious of the mass runners start to accelerate, leaving the rest to slog it out. Transport: Canary Wharf tube or Heron Quays DLR.

If you’re taking the kids to see a parent run, this is a good spot, very handy for a visit to Mudchute Farm. Encourage the kids to shout and applaud the rest of the competitors, too; it’s not so crowded here and their support could make a big difference. Transport: Mudchute DLR.

The course takes the runners through the underpass here. Catch them as they emerge from the darkness, having wrestled with their demons in a rare moment of privacy. Transport: London Blackfriars rail.

The competitors are more scattered and visible now; their goal is almost in touching distance. Cheer them on towards the finish then head for the alphabetically signposted meeting points in Horse Guards Road and Horse Guards Parade. Transport: Embankment tube or Charing Cross rail.