Learning the Knowledge with A-Z

Learning the Knowledge is no easy task. When spending time in London it’s a familiar sight to be surrounded by black cabs busily transporting tourists, commuters and day trippers expertly around the city. Have you ever wondered though exactly what it takes to be a London cabbie? We trust them to know when we ask for our destination exactly how to get there and which route is quickest, but how do they get to this level of expertise? I met with James Baglin who is in the process of learning the trade to find out….

`It’s not easy doing the Knowledge! I’ve always known I wanted to be a London taxi driver; my Dad’s been doing it for 27 years so I’ve always had it around me as I was growing up. I’m 26 years old now and I’m hoping to pass by the time I’m 30 although it might take me longer as there’s so much to learn!

To start with you have to learn the 320 routes listed in the ‘Blue Books’, which are all within the six mile radius of Charing Cross Station in London, and then once you’ve managed that you have to sit a written exam and identify the shortest route between five sets of start and finish points which could incorporate any point in any route – and that’s just the first part! After that it’s a series of oral exams with just you and an examiner who themselves is a cab driver. 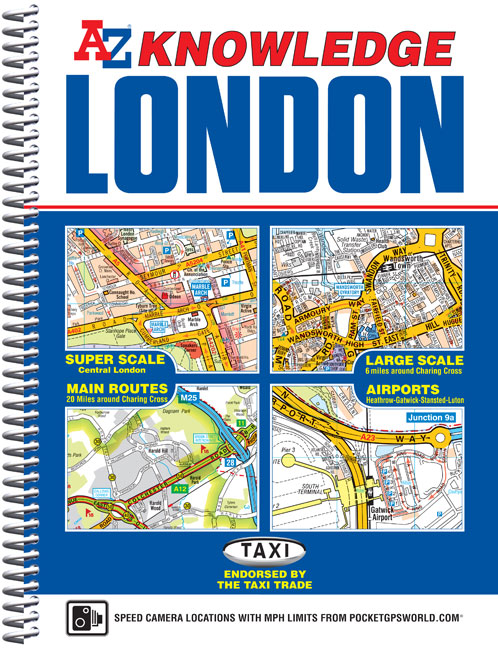 It’s a daunting challenge when you first start but I’ve been using the London Knowledge Atlas to help me and it’s absolutely amazing. All the routes in the Blue Book we’re given are linked to the corresponding area within the Atlas so it makes it really clear to see where you need to go and how exactly to get there. I also have the laminated Premier London enlarged special edition up on the wall in my house for revising with – I can draw on it and map out which areas I want to cover and it’s a great visual aid to really get to grips on how best to tackle each section.

If I had to give any advice to anyone thinking of starting the Knowledge it would be just don’t give up. It’s a huge challenge but as long as you stick at it, keep going and work hard you’ll get there. You have to find a way of learning that suits you – there’s no set right or wrong way and no one method is better than another but I would definitely recommend going out and driving the routes you’re learning each time. I’m out on my moped at least four days a week, I’ve got A-Z signage stickers on it and people are always asking me where I got them from! The best thing is that the QR code on them takes you directly to the Knowledge page on the A-Z website so anyone who sees it can scan it and access all the products they need. I use the London A-Z Premier Map when I’m out on my bike, it’s so clear and easy to read so it really helps me learn the routes.

The next six months for me is carrying on and continuing to learn more routes and bigger sections; it’s frustrating and exhausting sometimes but I know as soon as I get the keys to my own black cab it will all have been worth it, and I’ll have my A-Z with me every step of the way!’